The Committee for Economic Development Australia (CEDA) estimated on Tuesday that a critical shortfall of aged-care workers has more than doubled over the past nine months, soaring from 17,000 workers in August to an estimated 30,000 to 35,000 in 2022.

CEDA senior economist Cassandra Winzar warned efforts to overhaul the industry after the aged-care royal commission’s shocking findings are now at risk unless more is done to fix the severe shortage of carers.

This includes Labor’s election pledge to fund 24/7 nurses at every aged-care centre, she said.

“The promise and desire for better quality care is fantastic,” Ms Winzar told The New Daily.

“But with the workforce as it currently stands, and work conditions as they currently are, they’re [Labor] not going to be able to deliver on those promises.”

CEDA has called on the Albanese government to encourage more overseas workers to migrate to Australia to fix the staffing crisis over the short term, suggesting a new visa be created and targeted at personal carers.

But Ms Winzar said low pay rates and tough conditions for aged-care workers must also be improved – otherwise Australia would be left with too few workers to care for its rapidly ageing population.

CEDA’s latest report on Australia’s aged-care workforce warns the country is heading towards a “worst-case scenario” where too few staff are entering the industry through migration, and too many local workers are leaving it due to tough conditions and low pay during the pandemic.

If this continues, Ms Winzar warns Australia faces a shortfall of up to 35,000 carers every year.

“With more workers leaving the sector and fewer coming in through migration, the gap between where we need to be to meet demand and where we are currently has essentially doubled,” she wrote.

“Without substantial growth in the workforce, not only will we fail to meet the aspiration of improved care (as called for in the royal commission), but our levels of care will likely deteriorate.”

As things stand, CEDA estimates the industry needs an additional 8000 workers a year to at least meet best-practice international standards. 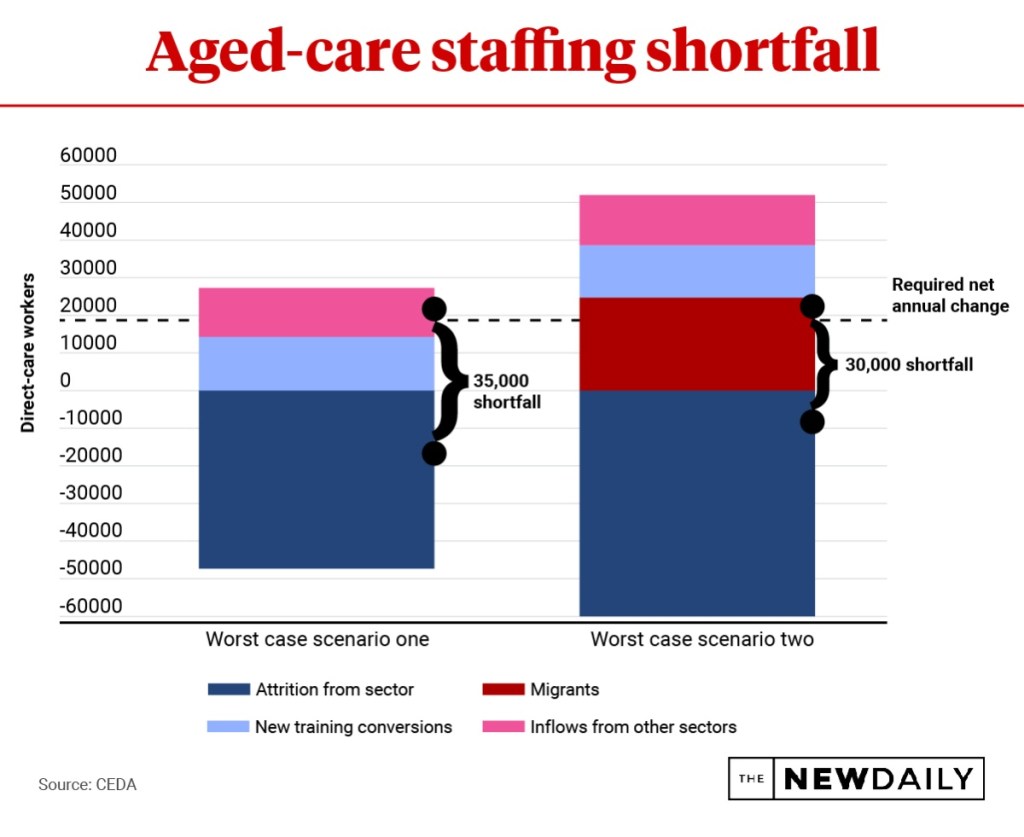 The aged-care royal commission found in 2020 that understaffing was a key driver of horror stories throughout the sector, including malnutrition and maggots found in the wounds of residents.

The Albanese government promised to address these poor standards during the federal election campaign, pledging to lift annual funding for the industry by $2.5 billion.

Its commitments included increasing the individual care time provided by staff and ensuring a nurse is available 24 hours a day, seven days a week at every aged-care centre in the country.

Labor also promised to back a union bid to secure a 25 per cent pay rise for aged-care workers through the independent industrial umpire, which Ms Winzar said would be necessary to stop workers from deserting the industry.

However, CEDA warns a much-needed pay rise for aged-care workers won’t be enough to address immediate crises facing the industry.

That’s partly because there are not enough available workers to fill the vacant job positions.

“Personal care workers, the majority of staff in the sector and the people providing day-to-day care, aren’t on any skilled migration lists,” she said.

“They’re not considered qualified enough for that.”

Alternatively, the government could create a new visa category aimed at aged-care staff, it said.

“[We need] people who are qualified and want to work in the sector – trained and interested.”

“We’ve got to ensure there’s no exploitation of workers and that means we have to be looking at wages that are consistent with the expectations of the union and recommendations of the royal commission,” he said.

“We have to get the fundamentals right, and then retraction and attention will be a key issue.”

But the new government has yet to outline any concrete plans, ahead of the budget in October.

Minister Wells’ office did not respond to a request for comment before deadline on Monday.