Mountain biking is the sport of riding bicycles off-road, frequently across rugged terrain, and usually on bicycles developed specifically for mountain biking. In this article, we will explain what is a mountain bike as well as types of mountain bikes. 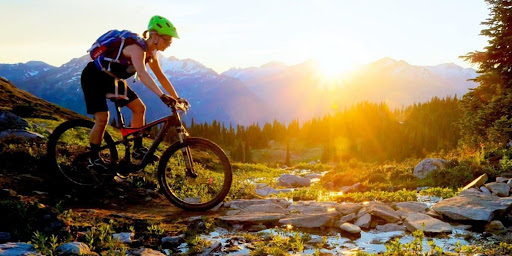 Imagine a Honda Civic, with its smooth tires, low ground clearance, and gear ratios optimized for greater speeds, it is highly efficient on the road. Now, imagine a brand-new Ford Bronco, the Bronco has thick, knobby tires, a high ground clearance, and low-range gearing that provides maximum torque. In this scenario, mountain bikes are similar to the Ford Bronco.

Below is the characteristic of a mountain bike:

There are many ways to enjoy riding a mountain bike. Even though it is called a mountain bike, you don’t have to ride it in the mountains. The trails range from wide, flowing logging roads to challenging singletracks with high-adrenaline obstacles.

This enables the two portions of the frame to move separately, while a shock absorber controls the pace of movement.

This type of bike is efficient on difficult routes with several obstacles while providing stability over vibration and during descent. This is mostly because of the rear suspension’s traction.

A single-speed mountain bike is a mountain bike with a single gear ratio and no shifters or derailleur hangers. These mountain bikes do not have additional gears that alter your bike’s gear ratio. As a result, they feature a freewheel system. This enables the rider to ride or free-roll without having to pedal.

An electric mountain bike or e-MTB is a mountain bike that comes with a lithium-ion battery. The battery will assist you when you pedal, gives you a boost so that you can ascend steep slopes and traverse difficult terrain without tiring. It stimulates the sensation of riding a standard bicycle by increasing the force of each pedal stroke.